I just bought the book called Wheat Belly, written by William Davis, MD. Dr. Davis is a cardiologist in the USA. The book basically describes the effects of wheat on our bodies and the reasons why. He describes how wheat causes a multitude of physical problems primarily related to blood glucose levels. The book also details how wheat started out as an innocent grass that was manipulated by man to create wheat, then in the last fifty years man began to really change the genetic makeup of wheat in an effort to increase yields and decrease losses through disease, drought, insects etc.
While Dr. Davis specialises in wheat all of agriculture has shared the same focus for the last fifty years. Yield per acre is what is considered most important. In the process nutrition and health have been sacrificed. Most people concerned with the issues realise that corn and soybeans, the next two most consumed agricultural products, have gone through the same transitions as wheat. However almost all consumable agricultural products have gone through the same process. Meat production has changed drastically. Our ruminants (cattle, sheep, goats) are being force fed grains to increase growth. Antibiotics and growth hormones are given to increase growth rate. Even the breeds have changed. Angus cattle have increased in size. Other breeds have taken over as the most popular breeds such as Charolais, Limousin, Belgian blue, etc. These are huge animals requiring huge amounts of feed. These cattle are ready for butcher at 12-14 months. Traditional breeds on grass take up to 30 months. Many new breeds carry a mutated gene that causes "double muscling" making the livestock look like body builders. Milk production has gone through the same process. The milk of today is far less nutritious than our grandparents drank. Hog and poultry production has turned into a factory operation where workers where coveralls, breathing and hearing protection. The manure has become a polluting concern. Years ago hogs were raised outside like cattle. Manure was not an issue. Hogs and chickens were raised on grain and garden waist. In fact that was what the hog was for years ago. The first recycler. Any farm waste was fed to the pig and turned into a meat product. Now waste is landfill, adding to our garbage problem. Meat is not the only issue. Vegetables are going through the same issues. Anything is sacrificed in the name of production. Vegetables are fed a steady diet of liquid fertilisers accompanied by a mix fungicides, pesticides and herbicides to decrease disease. Vegetables are picked before being ripe and "chemically ripened" in the back of transports as they are shipped around the world. Tomatoes and peppers are raise in hot houses with their roots bare, not even in soil. The chemists raising and experimenting with these vegetables are arrogant enough to believe they have out smarted mother nature.
Testing done on the products is usually minimal and irrelevant. The tests always seem to favour the new producing product. A large number of tests have been published lately that state organic is no better then conventional production. I do not dought that these same scientist are experts in hydroponics, because they must be smoking something. Something people have to remember is that the companies producing these engineered plants and animals have invested allot of money in their production. They will spend more money to make sure their product is accepted and flourishes. The people growing organically do not have patents on their products. They have no money invested(outside the farm). They also have a much smaller market. The money simply is not their to defend their way of production. The only time we get noticed is when someone like Dr. Davis writes a book that gets attention and gets people talking.
For your own test go to the grocery store and buy some organic and conventional bananas. Do your own taste test. Then tell me there is no difference.
Posted by Holden's Hide-a-way Farm at 08:40 No comments: 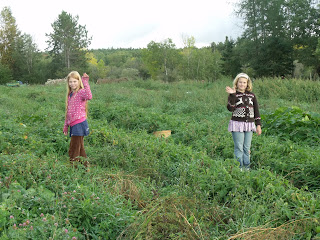 October has arrived and the harvest is done for another year. Vegetables have bean picked and stored in cans or in the cellar, hay is baled and the slow process of trailering it all home has begun, the grain is off and in the barn. We are drying seeds from a variety of vegetables to ensure an organic supply for nest season. The rest of the seeds and supplies for nest season will be ordered in the nest couple of months. It seems early but to ensure we get what varieties we want we must order early. We are beginning our marketing plan and determining prices now for next seasons vegetables. 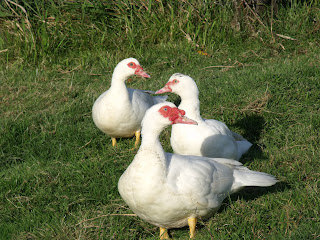 This summer has been a trying one on the farm. The worst drought in decades affected our vegetable, grain, and hay harvests. We only harvested about half the hay we usually do. But the expense was higher than any other year. This makes for very expensive hay. Hopefully we have enough. The vegetables faired a little better because of our organic growing methods. One of which is deep much. The 6+ inches of hay mulch added to the garden did not keep the weeds down, but with out it the drought would have been devastating. By the third week of July our soils were drying and our grass was turning brown, but the soil under the mulch was still damp. The end results were an average year for most of the vegetable production. As far as the grain is concerned we had a poor yield. The grain was thin and the grass and clover came up thick making combining the grain difficult for our old combine. Like the hay our grain yield was at about 50%.


In other news around the farm, many people read my article in the news paper about the spraying of herbicides in the forests around our region. The article received a lot of attention and in the end we were able to stop the use of helicopters to spray the herbicide close to our property. I even had two forestry representatives show up at the farm to make a sales pitch about the chemicals used. Like many of the under educated users of these chemicals they used personal experience with the chemicals as evidence of the safety. One guy stated that even had the chemical sprayed right into his mouth and had no ill effects. What they do not realise is that it is the long term exposure to these chemicals that cause the problem. Using their argument smoking, alcohol and most drugs are not hazardous. We all know that one cigarette, beer, or even hard core drugs will not usually be fatal if only used once. It is long term use that causes the real problem. The long term effects of the herbicides used are just now being studied. So far as most people can guess the results are showing they are NOT safe. The government knows how dangerous most of these chemicals are. But they turn a blind eye in the name of economics. Just this week Azinphos-methyl(AZM) a known harmful pesticide was taken out of production. AZM is a highly neurotoxic insecticide that attacks the human brain and nervous system. Where would we spray such a dangerous chemical? On our apples, pears, cherries, bluberries and parsley of course.


Many people wanted me to continue the fight to ban the use of herbicides in our forests altogether. Unfortunately this is not an easy fight. Forestry companies, chemical manufacturers and even the Ontario government support their use. I simply do not have the time or resources for such a fight. However I would support any one that takes up the fight. Nova Scotia and BC both have activist organisations called Stop The Spray. They are dedicated to stopping the use of herbicides. Their web sites contain a wealth of information on the topic. One of the biggest issues with our modern day reliance on strong chemicals is the fact that not everyone reacts the same to them. They may cause prostate cancer in some, Parkinson’s in others, maybe fertility problems, or allergic reactions or some other side effect ranging from severe to not so severe. All of which are not easily measured in a six week study trial. Most of which are paid for by the chemical manufacturer. Most people do not know that our government does not study and evaluate every chemical used in our country. Instead they rely on the chemical manufacturer to pay an independent firm to study the product and give the results. What decision do you think the independent firm is going to come up with? Monsanto has already been convicted twice of tampering with the results of studies done on their products. 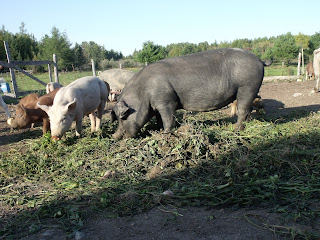 In any case I do not want these chemicals near my property. After reading my article one of my neighbours called the Nipissing Forest Resource Management office and asked what effects the chemicals have on wildlife. Their response was that the wildlife usually leaves the area because the chemical kills off all their food. However what they fail to realise or tell you is that the chemical takes a couple weeks to become effective. In that time the deer, moose, rabbits, bears, etc are all ingesting the chemical laden leaves and berries. My neighbour was very upset, because they are devoted naturalists. They hunt for many reasons but one is knowing that the meat they have is clean, chemical free and natural. Or so they thought.


This blog is too small to get into all the details about our over reliance on chemicals. I hope it does spur people into researching the topic themselves. I am content with the fact that I was able to get the spraying with helicopters stopped in my vicinity. Especially since I was told just last week that areas close by were sprayed this summer and they missed their target. Instead they sprayed the front yards of the rural homes.


So the winter wind down has begun and I will be able to spend more time on the blog and creating our new website. After I haul the hay home, spread the manure, plow the fields,…I though winter was supposed to be slow on a farm.


For anyone interested our winter meat box prices and details will be going out this week. As well as information on our 2013 vegetable CSA program. Anyone signing up before December will get a discount. People that sign up early allow us to make sure we can order and pay for supplies that we will need for next season.