So many new faces

Well its time for some new boys around the farm. Every year we have to bring in a new boar for the pigs and a new bull for the cows. We made a trip this year out of town, all the way to Cornwall. Approximately 1400km round trip.
First of all the boar. We wanted this year to go back to a breed we had in the past, a large black. The name pretty well describes the breed. We have a sow that is of the same breed, so now we will get some purebred little large blacks in the spring. Large blacks are a heritage breed that dates back centuries. They originated in Britain. It is believed they are a cross between old British breeds and an oriental breed. They are noted to be excellent producers of bacon and ham. They have well marbled meat, much like the black Angus cattle. The meat is very tender and slightly pinker than most pork. The breed almost went extinct because of the industrialisation of pig farming. Large black pigs were the traditional pastured pig. They were often employed in orchards because they root less and graze more than most breeds.
We are very excited about this purchase. We have not named him yet, but we are contemplating a few names. He is about 4-5yrs old now and 600lbs. His temperament is good, but he is a boar, so we have to be careful around him.

The next purchase was a new bull. Bandit, we did not name him, is half belted Galloway and half Piedmontese. Both are very old breeds. The Galloway is closely related to the Angus, in fact they were once included in the same herd registration book. However the Angus has been bred for years now to increase size and growth rate. Galloway's instead have been bred for meat quality and hardiness. 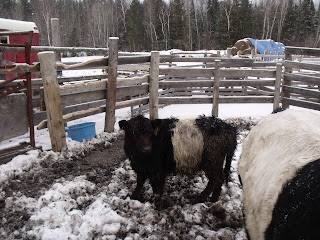 The heifer in the picture with the bull is a new addition as well. She is his half sister. You can by her coat that they have much thicker fur than Angus. If fact Galloway's have tested second in hair density tests. The only bovine species to test higher was a buffalo. Piedmontese are an ancient breed that are noted for double muscling. They produce larger muscles and they are leaner than most cattle, while keeping a smaller frame. Shortly after this picture was taken the bull decided he was ready to meet the rest of the herd. He pushed open the big wooden gate, breaking the chain that holds is closed.
I almost forgot to mention the colour. My girls call them the Oreo cookie cows. Not all Galloway's are belted. They come in a variety of colours including white, brown, red, dun, and black. All except white can have a belt. The belt is a dominant colour pattern, which means all of our calves next year should have a belt. The belt has no significance other than they look different. 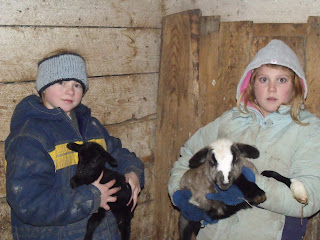 Another addition we picked up along the way was a little black orphaned ewe lamb. The brown/white lamb in the picture was born here. She is the result of a ewe that I bought at an auction.
Posted by Holden's Hide-a-way Farm at 16:29