After much discussion Lynn and I have decided to offer a CSA for this year to a limited number of lucky people. For those that are not familiar with what a CSA is there is a wealth of information on the internet. CSAs are becomeing increasingly popular all over the world. They offer participants a steady supply of local vegetables all year. Usually farm produce is made available on  a weekly basis. Purchacers pay for a subscription that lasts from June to October. Usually 18-20 weeks. Knowing how many people to supply upfront allows the farmer a chance to plan out production better. This type of program works well for both the subscriber and the farmer. The subscriber accepts some of the risk. For instance if potatoes do not do well they may not get as many. However if another product does well then more will be made available. In our case subscribers will be getting a healthy supply of organic vegetables for a price that is often less than conventional vegetable prices. The CSA subscriber pays for the subscription up front. This allows the farmer to have the capital to start the season as well as shows commitment from the subscriber.
Our CSA will be operated in a simular manner. The cost of a subscription for a season will be $525. Half subscriptions are also available for $275. Payment can be made partial payments providing the total has been payed before the delivery of the first vegetable box. A half subscription offers the same vegetables, but on a bi-weekly pick up schedule. Because we are offering fresh weekly vegetables subscribers are required to make arrangements for pick up if they are unable to make it. Delivery to your home will be an option with in city limits of North Bay for a small fee. If picking up we ask that you bring grocery bags. Other products can be added to your box such as some of our many meat products as well as our popular free range eggs.
Lynn and I have spent many hours going over how to price our CSA. Searching other farms the prices range from $500-$850 for a subscription. We settled on $525 because this is our first year operating a CSA. We are expecting that subscribers will help us learn from this season. We grow allot of vegetables evey year. However a CSA requires much more planning. When growing vegetable regularily it does not matter if all the tomatoes ripen at the same time. With a CSA we want some to ripen early and continue through out the season. Our price is equal to $26-$29 for a 1/2 bushel per week depending on the length of the season. We think this is more than reasonable for organic vegetables. Selection is limited at the beginning of the season but as it progresses the variety of vegetables will increase and change.
The CSA is the next logical step for our family in our progress as a farm. It allows us to expand availablity of local products to North Bay and area residents. As we all know local foods are the key to healing our family and our planet. We will be making up a pamphlet detailing the CSA and what we expect will be included. I will also be blogging more on the topic in the near future.
Posted by Holden's Hide-a-way Farm at 08:17 No comments:

Where did spring go?

I am beginning to think we were really spoiled by the weather this March. It looks like winter just does not want to let go. There must be 3 inches of snow outside. It makes for damp slippery conditions that no one is happy with. When I go outside the cattle and sheep look at me like its my fault. They are not impressed by the damp cold weather. The soil that I was worried was too dry has turned into a soupy sloppy mess that has is very good at removing rubber boots. There is not much more maddening than trying to make it through the mud only to have a rubber boot sucked off your foot. Before you have a chance to realise what has happened your shin deep in mud with a socked foot. If you were lucky enough o keep your sock on. Sorry no pictures of this experience. 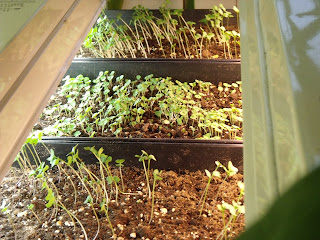 Luckily there is allot of work that needs done in the house. Lynn is still planting away. She just informed me that she is up to 1000 tomato plants. My house has turned into a tropical rainforest. It is getting difficult to walk through the house without knocking over a plant of some kind. Our window sills are covered with plants of various kinds. I feel like a jungle explorer peering through the jungle foliage every time I look out the window to see what the dogs are barking at, or why the cows are mooing. 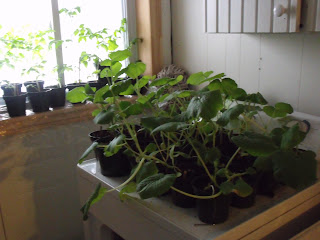 Spring can't come soon enough now. Looking at the long range forecast suggests that thing will improve by next week. If you trust the weather network, that means we can start putting these plants out into the greenhouse.  Night time temperatures have to start staying above freezing before we attempt the relocation of Lynn's spring efforts. Next year we hope to have some sort of supplement heat for the greenhouse. 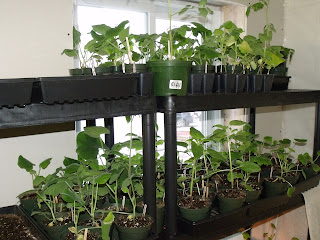 If everything goes well we should have enough vegetables to feed a small village. Lynn and I are hoping people enjoy our vegetables as much as they have our meats. We are have faith in the fact that there is a growing number of people out there that are worried about how and where they get their food. Our customers trust that we produce foods with the right priorities in mind. Unfortunately there is a growing number of "commercial" producers even locally that are starting up and taking advantage of the public trust. People need to start looking into where their food comes from. Ask questions. Don't trust catch phrases such as free range, naturally raised, grass fed, or even organic. Ask your farmer exactly what they do and how. You might be surprised to find out it is not what you think. You might even find out the person you are talking to isn't a farmer.

Its April and despite the sayings about April showers it has been a fairly sunny month. The greenhouse is up. As soon as the night temperatures stop dipping below zero, or we find a woodstove to heat it with, we will begin filling it up with seedlings. Lynn has gone crazy planting seeds. Pretty much any area that gets sun and some that don't, has plants growing in it. My kitchen is looking more like a "hot house" than a kitchen. Fluorescent lights are everywhere, with a few piled in the corner waiting for Lynn to decide where they could best be utilised. Lynn has been busily planting seeds in trays, then separating the seedlings into small cells like the ones you buy at the garden centre. The next step is to re pot the seedlings into larger 4 inch pots. It is a time consuming job that has kept Lynn busy for the last few weeks. Lynn uses a store bought organic potting mix. As soon the seedlings are up they receive a daily watering of manure tea. Manure tea is basically an organic fertiliser that we make. Soaking well composted manure in water to make a "tea". Despite the ingredients there is no smell. The manure is well composted and odourless. It seems to be working very well. The pumpkins, zucchinis, and squash are taking off. Our tomato plants are strong and about 8 inches high now. At last count we had about 300 broccoli plants coming up. Lynn plans on doing three farmers markets this summer, so she is going to need the stock.
Other things happening on the farm are not very exciting. We are hauling a lot of manure. The fields that we are using for the garden require allot of composted manure. The pastures for the livestock need manure as well. Most people don't realise it but manure is the most valuable product we produce on the farm. Without it everything else suffers. Manure is  like gold to an organic farm. Everything we produce takes nutrients from the soil. Vegetables, hay, grass, livestock all remove nutrients from the soil. The only way we can put the nutrients back is through compost. Most farms have depleted soils, simply because manure has been considered a waste product. Manure was piled up or given away instead of being applied back to the land where it belongs. We compost the manure for many reasons. First of all economics. As manure composts it reduces in size by up to ten times. That means less hauling, less diesel fuel, less time. All good things. Secondly composted manure is more stable and uniform. The composting process produces intense heat, which kills germs, and weed seeds. The pile can get hot enough in the middle to burn. Some creative farmers have been able to harness this heat to heat barns, greenhouses, even houses. Composting also eliminates the risk of ground water pollution. Fresh manure is full of molecules and compounds that cause pollution and foul odours. Compost smells like soil. The molecules and compounds have been reduced to stable natural levels. Manure is teaming with good and bad bacteria. As it is composted the ratio changes until the good bacteria far out number the bad. There are literally millions of simple life forms in a handful of compost. All working together to produce the soil that the more complex life forms depend on. The plants also produce nutrients as well through photosynthesis. They capture oxygen, carbon dioxide and nitrogen from the air, and convert them into a product that is usable by bacteria and higher life forms.
That's probably enough about that shi...stuff. 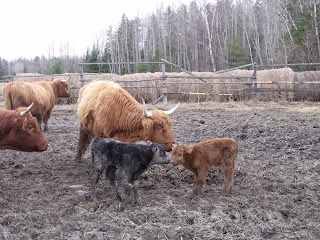 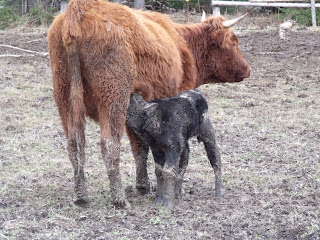 I think we have had our last lamb for the year. But I have been surprised before. A couple of younger ewe lambs born late last year have produced healthy little lambs. Calving season should be getting into full swing. We have had five calves (3 bulls 2 heifers)so far. We should end up with about 16 this spring. There will be more in the fall. For those interested the little brown highland bull is doing well. He is a little slower than the others but is catching up quick. The black bull calf in the pictures is about a week younger. He is about 20lbs heavier. This is mostly due to the breed. The black calf is mostly angus. The mother is a cross breed the father was pure black angus. The brown calf is pure highland. As I mentioned before they are a smaller breed. Next year we will get our first crop of highland shorthorn calves. Breeding our own breed of cattle is a long process. Since these pictures were taken we have had a small highland heifer. Her pictures will be coming. At birth she was tiny, about the size of our border collie. The girls called her Friday, since she was born on Friday the 13th.